It seems that no clog championship styling itself as a “World Championship” had been held since Dan Leno had won the championship outright at Oldham in 1883.  That contest had been organised by theatre impresario E. H. Wood  and by 1898 he determined to revive the competition.

The 1898 World Championship was held at the Peoples’ Empire, Bow, London commencing on Monday 7th February. There were 28 competitors. Judging was on the basis of Execution, Original Steps, Time and Carriage. The competition was different from others known in that each dancer competed against one other in the heats, the winner going through. Winners in bold below: 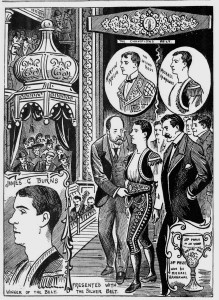 The belt was presented (in the absence of Dick Burge whoever he was) by George Ware.
Music composed specially by Messrs. Thompson and Peterson.
Stage manager was T.W. Davis.