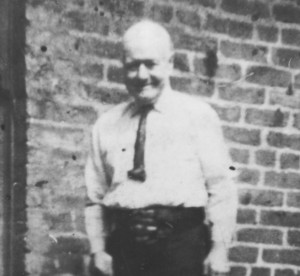 Son of Elijah and Bridget Ellwood,  James was born at Maryport, Cumberland in 1869.

By 1890 James was living at Grangeville, Pelton, Co. Durham. On 24th November of that year, at the age of 21, he married Elizabeth Robinson, aged 19, at the Register Office, Chester-le-Street, Co Durham. His occupation is given as coal miner.

Jimmy is the first clog dancing member of the family of whom we have any concrete knowledge. It is not known from whom he learnt to dance, although his mother, who was reputed to be the clog dance champion or Ireland, may have had some influence. It is interesting however to note that the family originallycame from Cumberland, although Jimmy was living in Co. Durham at the date of his marriage. Another clog dancer with the name Ellwood is known from Cumberland. Ellwood (sometimes Elwood) is a fairly common name in Cumberland and Westmorland and it is very possible that hewas no relation.

In fact it is believed that Jimmy was living in Co. Durham in 1888, that being the year he claimed to have won his first competition. This was held in Foster’s Concert Room. Stanley Hotel, Stanley, Co. Durham. Jimmy won a purse of twelve silver three penny pieces. He seems to have begun teaching the following year and in his long career as a clog dance instructor taught pupils from all over Tyneside.

By 1900 Jimmy was working at Twizzell Colliery, Co. Durham and was teaching at his house nearby. Pupils would come, sometimes several at a time, to his house for lessons. He would take a door off its hinges and lay it on the floor for his pupils to dance on. His method of teaching involved showing his pupils a step or two and then making them practice while he either ate his supper or went down to the Jingling Gate public house nearby for a drink. He was a very strict teacher, and it was often difficult to even get through a single step without being stopped for corrections.

Jimmy also danced in, and occasionally arranged, charity concerts for injured miners. These concerts were a not infrequent occurrence in the North-East in the days before National Insurance. One of these was held at the West Pelton Store hall, Co. Durham in 1906 for a man who had lost his leg in an ccident at the Twizzell Pit. On this occasion the Colliery Manager was the Concert Chairman and about £10 was raised for the injured man. It was at this concert that Jimmy’s son Johnson danced for the first time with his father.

In addition to charity concerts, Jimmy is also known to have performed at a type of competition known as a “go-as-you-please”. This involved short performances by amateurs or semi-professionals of whatever type of entertainment they were able to provide. Singers and musicians were most common, but almost any type of music hall act seems to have found its way on to the go-as-you-please stage, including the clog dance. Frequently the winner would be the performer who got the most applause, the prize ranging a sum of money to a piece of beef! The competitions took place in local working mens clubs, village halls and occasionally as an interlude in professional stage shows.

Jimmy seems to have been well-known for his participation in these competitions, certainly he was marked down as a man to beat by other dancers in the area.

Jimmy also had an association with the Royal Earsdon Sword Dancers. In 1908, the sword team visited Alnwick Castle to dance on the occasion of the visit of the Prince of Wales (later King George V). This team had been in the habit of visiting Alnwick Castle each year at the invitation of the Duchess of Northumberland in order to dance at the annual Christmas party which she organised for local poor children. His resulted in the Earsdon Sword dancers being invited to dance for King Edward VII and Queen Alexandra at Alnwick during their visit ti the North East on10th July 1906. It was after this performance that the team added the “Royal” to their name. In addition to the sword dance, one of the members of the team, George (Geordie) Osborn, who was a clog dancer, gave a performance. By 1908 however, Osborn was in the sword team and it seems that Jimmy was imported as a clog dancer for the occasion. Whether he danced with the at other times is unknown.

In 1923 Jimmy and his son Johnson teamed up as a double act for a short period and traveled around local theatres. Jimmy was offered a full-time professional engagement in London, but decided that this was too far away and so continued to dance in his spare time whilst carrying on his job as a miner. Jimmy also performed as a double act with various of his pupils, one of whom, Sammy Bell, was able to recall a particularly unusual “party piece” involving dancing on the backs of two boot brushes. The format of these performances was almost certainly very variable but would typically involve both dancers entering together and performing a few steps. Jimmy would then dance a few more complex steps as a solo, the performance ending with both dancers together once more.

Competed in the Northumberland and Durham Championship held in Stanley in 1935, apparently being placed 6th.  Prior to the competition he prepared lists of the dancers entering with his views on their chances of success.  He was obviously something of a self-publicist and a report of his competition entry appeared in the local press before the event.  Jimmy was very dissatisfied with the way the competition was organised and the result.  Copies of his correspondence in the local press are available.

Jimmy listed his pupils as including the following, although it is likely that many of these were dancers to whom he taught occasional steps rather than individuals who learned all their dancing from him:

Information on this page derives from an interview with John Surtees on 14/9/1980, reports in the Stanley News for 24/5/1935 and  21/6/1935 and an MSS list of pupils and an MSS list of competing dancers, both in Jimmy Ellwood’s handwriting, shown to the IRT by Angus Catanach.