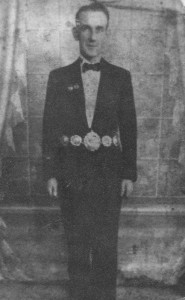 Joe had learned to dance, with his brother Peter from their father.  He in turn had learned from his father, Patrick Dailey who had lived and danced in Cumberland (Peter said he was a champion) and had moved with his family to Tyneside at some stage.

Joe Daley entered several competitions from the age of nine (none have been traced and only one was mentioned by name, that at the Kings Hall Newcastle ) but first entered the Northumberland and Durham Championships when these were held at Stanley, Co. Durham in 1935, when he won.  He won again  when the competition was held in Durham in 1936, but was beaten into 2nd place when the competition was held in Gateshead in 1938.  It was said that the latter was the only competition he had ever lost.

Unfortunately when interviewed Peter Dailey could not remember any steps other than Double Shuffles and some step units..

IRT were told b Dickie Farrell‘s son Wheaty Farrell on 11/10/1980 that  Joe was one of his father’s pupils, however in the light of the information from other interviewees this is perhaps unlikely.