The English Folk Dance and Song Society organised the Northumberland and Durham Championship at Hexham  commencing in 1949.

In that year  the competition was held in the Queen’s Hall, Hexham, Northumberland.  The competition was organised by Peter Kennedy, at that time the EFDSS representative in the North East.  He had placed advertisements in local papers to encourage dancers to compete.

There were two competitions, a junior championship dancing six steps and a double shuffle, and the senior  Northumberland and Durham Championship dancing 10 steps and a double shuffle.  In the event a number of competitors were disqualified for dancing not enough steps.  Unlike pre-war competitions all the dancers performed sequentially in one afternoon, there being no knock-out stages.

The events seemed to cause considerable rivalry and ill-feeling between dancers, allegations being made of corruption and cheating (sometimes by the judges).  See the interview with  Mary Jameson on  2/12/1981 for one view and that with Doreen Kerr on 1/3/1982 for another. 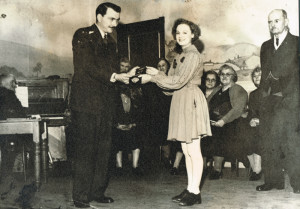