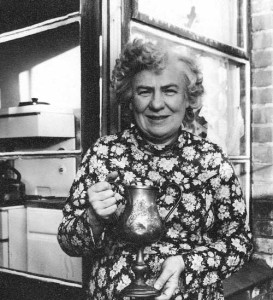 The IRT first heard of Ivy Sands when touring working mens’ clubs in the Newbiggin and Stakeford areas of Northumberland in October 1980.  Notes of that trip are available here:

Chris and Alice Metherell later visited Ivy on a considerable number of occasions.

Ivy Sands (1921 – )  Under her maiden name of Anderson had learned her dancing from Charlie Hunter who lived in Barrington and who had in turn learned from Dickie Farrell.  At the time Ivy was living in Bedlington Station.  She learned for about 4 years from age 4-8 paying a shilling (now 5p) a lesson.

Full biographical details can be found in Metherell, A. & C.,  Mrs Ivy Sands’ Double Hornpipe, Newcastle: Newcastle Series, [1981] and in the notes referred to below, however in brief she had danced at local go-as-you-please (ie talent contests) for small prizes.  She danced with another, rather tall pupil of Charlie’s Tommy Makepeace as a “Mutt and Jeff” act.

She also competed in the Northumberland and Durham Championship competition in 1936  in Durham.  In the first round she danced against Herbert Turner (also a pupil of Charlie Hunter) whom she beat eventually coming 5th.  During WW2 she entered a clog competition at Stanley, Co Durham, organised by Harry Robinson when she was placed 3rd and awarded the large pewter cup which can be seen in the photograph above. During the 1960’s she had danced at a competition at Boldon Colliery organised by Johnson Ellwood (she was 2nd)  and later judged at another of his competitions.

She taught very few dancers herself, the only one mentioned being Molly, who was unplaced at an EFDSS competition at Hexham in 1949.

Ivy taught three sets of steps, which she referred to as her Single Hornpipe, Double Hornpipe and Exhibition Steps.  The first was really a beginners set, the second rather more complex and the third set contained material suitable for competition work.  In practice Ivy would mix steps from the Double Hornpipe and the Exhibition Steps to make up a routine suitable for whatever occasion she happened to be performing at.

In 1983, whilst teaching at a weekend of dance organised by the Newcastle Cloggies at Boldon Colliery, South Tyneside, Ivy remembered a further routine, The Sailors’ Hornpipe which she also danced in clogs, although she had mentioned previously that she had learned the dance from Charlie Hunter.  Whilst this routine was being taught at a similar event in 1985 she remembered two further steps!

Ivy’s repertoire has been published in full in the Newcastle Series:

The following films of Ivy are available: