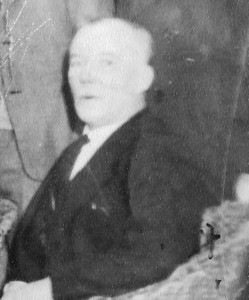 Referred to by an anonymous person on 12/10/1980 as winning  a competition, by beating Jimmy Gladstone of Newbiggin, Northumberland into 2nd place.  Won the Northumberland and Durham Championship before WW1, date unknown.  He competed in the 1908 Championship in Gateshead when he was placed 5th.

Dickie Farrell taught  in the scullery of his house after finishing a shift as a miner in the local pit.  In the 1920s he performed as a trio with  his daughter Lily Farrell and Kit Haggerty.  They would stand in a row with Kit in the middle, all start together and then do a step each in turn.  They would do perhaps 10 steps in all.

He had no names for any of his steps, just numbers.  The IRT were told that he only danced to schottische rhythm and had no waltz steps.  Although dead by the time the IRT were collecting, material which derives from his repertoire was collected from, Lily Farrell,  Kit Haggerty and Ivy Sands.

Judged at the Northumberland and Durham Championship competitions at Stanley in 1935 and Durham in 1936.