The Reading Step and Traditional Dance Group held day of clog and music workshops in 1979.  In 1980 this was renamed as the Clog and Step Dance Festival. 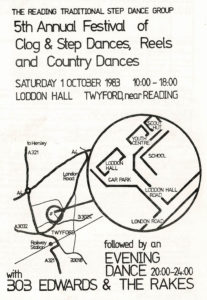 The fifth Day of Dance, on 1st October 1983,  was held at the Lodden Hall, Twyford, Berkshire.

There were also guest performances and a lecture by Pat Tracey entitled “Background to East Lancashire Toe and Heel Dancing”.

The following are available. :  Programme.

The following clip cannot be dated with certainty but perhaps dates from this occasion. Unfortunately the identity of the performer is not known Filmed by Paula Earwicker and used with her permission.