The Reading Step and Traditional Dance Group held day of clog and music workshops in 1979.  In 1980 this was renamed as the Clog and Step Dance Festival

The ninth Clog and Step Dance Festival, on 3rd October 1987,  was held at the Lodden Hall, Twyford, Berkshire. 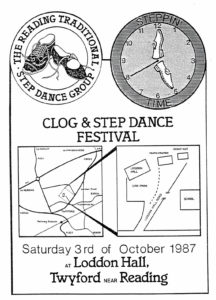 There were also  guest performances.

The following are available: Programme.